The History of the Elijah Cup

In the First book of Kings, 1 Kings 17:1-16, is the account of the prophet Elijah who visited the poor widow who had only enough flour and oil in her jar for one more cake of bread, and then she would die.  Elijah asked her to make him the cake to eat.  In great faith and love she did as he asked.  Elijah stayed with her for a year and through the power of God the jar never became empty.  Likewise it is through the power of God that the never-ending need for Priests is fulfilled—the Church will always have Priests when God is invoked with the faith of the poor widow.

During the Jewish Passover Seder, four cups of wine are poured and consumed at key moments during the meal, each remembering one of God’s promises to the enslaved Israelites (Exodus 6:6-7). A fifth cup, called the Cup of Elijah, is poured in honor of Old Testament prophet Elijah (1 and 2 Kings, Chronicles), who is well remembered for his contest on Mt. Carmel with the false prophets of Baal and his ascension into Heaven on a flaming chariot. The Elijah Cup is left untouched during the Seder Meal because it is a symbol of the Jewish belief that Elijah would return to usher in the Messianic Age – the time of the Messiah.

As Christians, we, of course, believe that Jesus is the Messiah foretold in the Old Testament, and so it is fitting that the chalice filled with Christ’s Precious Blood during Mass would be called the Elijah Cup as we bring it into our homes to pray for vocations. For us, Christ is the fulfillment of the promises made to the Jewish people with whom we share such a rich spiritual heritage.

The Elijah Cup then is a symbol of the bridge between old and new testament, old and new covenant, and our mission as a Church that continues as we look toward Christ’s second coming. Our priests, deacons and religious play an important role in living out this mission, particularly in the sacramental life of our Church of which the Eucharist is the key.

In modern times, the Elijah Cup devotional program was developed by the Serra Atlanta Organization of the Diocese of Atlanta, Georgia.  Serra Atlanta’s single focus is to foster and promote vocations, and if their name sounds familiar it might be because they took their name from the same Franciscan missionary, Saint Father Junipero Serra, for whom Serra Catholic High School in McKeesport is also named.

The US Conference of Catholic Bishops also recognizes this devotion and refers to it as the “Chalice Program.” 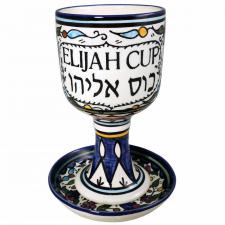