Age 95 of Greensburg, formerly of Lower Burrell, died Tuesday October 30, 2018 in Excela Health Westmoreland Hospital, Greensburg. She was born in Leeds, England on June 19, 1923 to the late Leonard and Dorothy (Day) Faller and has been a resident of Greensburg since moving from Lower Burrell in 2015.

Mrs. Fitzmaurice was a member of St. Margaret Mary Roman Catholic Church, Lower Burrell where she worked as a fourth grade teacher 20 years.

Margaret was also active in several ministries including serving as a lector, teaching CCD and singing in the funeral choir. She participated in the quilting group and the former Ladies Guild. A supporter of the Pro Life Movement, she served as bus captain for the annual March for Life in Washington DC.

The phone was Margaret’s lifeline to keeping in close contact with family and friends. She also took pleasure in quilting, knitting and visiting family.

In addition to her parents, she was preceded in death by her husband Vincent C. Fitzmaurice, and granddaughter Sara Fitzmaurice.

Friends will be received Friday from 2-4 & 6-8 PM at THE RUSIEWICZ OF LOWER BURRELL FUNERAL HOME, 3124 Leechburg Rd. at Alder St. where Prayers of Transfer will be said Saturday at 9:30 AM followed by Christian Funeral Mass at 10 AM in St. Margaret Mary Church. Burial will follow in St. Mary Cemetery, Lower Burrell.

The family suggests donations made in her name to St. Margaret Mary Church or Try Life Center. www.RusiewiczFH.com 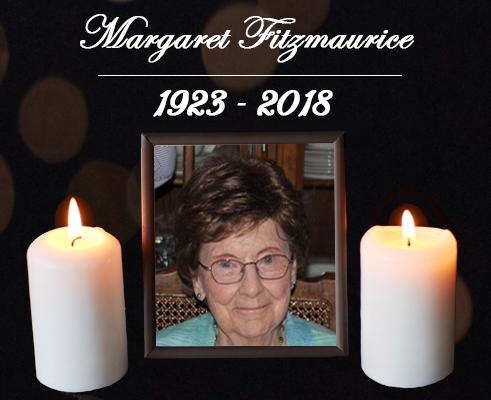