Saint Agnes of Rome, our patron saint, was born to a wealthy Christian family in Rome in 291, just 260 years after Jesus walked the earth. Agnes was born near the end of a forty-year period of Christian tolerance which had come about because of an edict issued by Roman Emperor Gallienus. This gave Christianity opportunity for growth in the Roman Empire and throughout the greater Mediterranean area and beyond.

At an early age Agnes devoted herself to God. One quote attributed to her is this: “Christ made my soul beautiful with the jewels of grace and virtue. I belong to Him whom the angels serve.” However, Agnes’ earthly life was to be cut very short.

In 303 Roman Emperor Diocletian, overturned the tolerance era, and made another declaration of Christian persecution. This time became known as the “Great” (and final) Persecution. Shortly after the persecution began, Agnes had a suitor whom she repeatedly turned down. The suitor sought to ruin Agnes and reported her as a Christian. To prove that she was not Christian, Agnes was required to make a sacrifice to the Roman gods. She refused and was condemned to death. However, Roman law did not allow the execution of virgins so she was thrown into a brothel.

Agnes continued to refuse to betray her commitment to God and while in the brothel one man who lusted for her became blind. Agnes prayed for him and his sight was restored. Others who tried to rape her were also blinded and miraculously Agnes’ purity was preserved throughout her time in the brothel. Agnes was led to her death unshackled, because, as legend has it, none of the shackles would hold her small wrists. She was tied to a stake, but the wood would not burn. This prompted the officer in charge to draw his sword and he beheaded her. Agnes was martyred in 304. She was just thirteen years old.

Saint Agnes is the patron of girls, virgins, chastity, survivors of rape, crops and gardeners, the Children of Mary, betrothed couples, Girl Guides, the Colegio Capranica of Rome, and the diocese of Rockville Centre, New York.

Saint Agnes’ symbol is the lamb. Not only does the lamb invoke the idea of purity and chastity but also Agnes’ name is similar to the Latin word for lamb, “agnus.” She is often depicted with a lamb and like other martyrs with a palm branch as well. 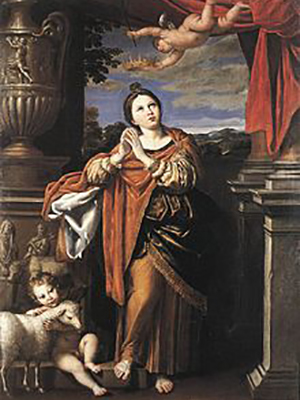 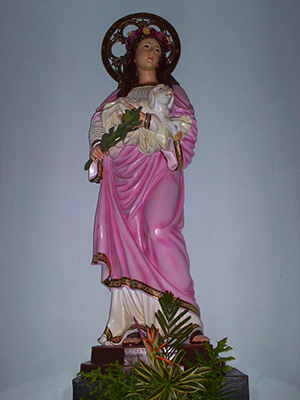 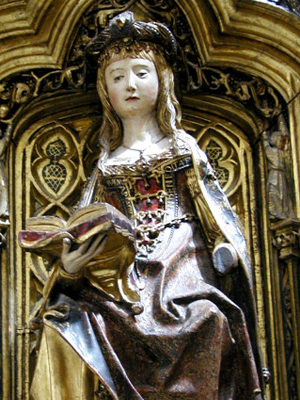 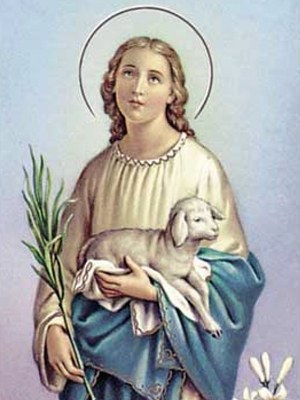 St. Agnes as depicted
on a holy card 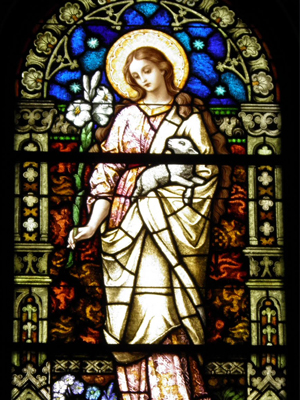 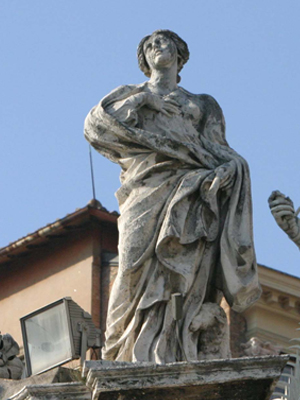 Over the centuries devotion to St. Agnes has been manifested in many ways. Some of these include: 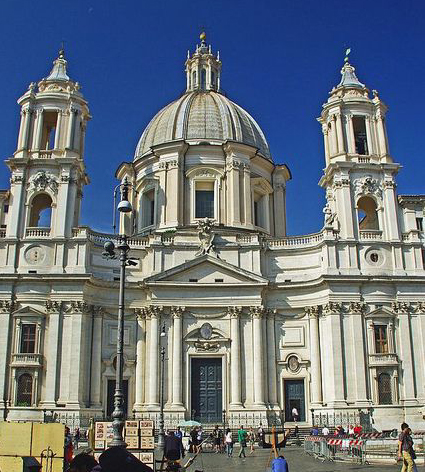 A few days after Agnes’ death, her foster-sister Emerentiana, was found praying by her tomb. When she refused to leave and reprimanded the pagans for killing her sister, she was stoned to death. Emerentiana was also later canonized.

In the 4th Century, Constantia, the daughter of Constantine, built a basilica on the site of St. Agnes’ tomb after being cured of leprosy while praying there. St. Agnes’ bones remain there preserved under the altar in Rome’s Piazza Navona, but her skull is preserved in a separate chapel. Saint Agnes’ basilica was entirely remodeled by Pope Honorius (625-638) and remains largely unchanged today, almost fifteen hundred years later.

St. Agnes is one of seven women, who along with the Blessed Virgin, are commemorated by name in the Canon of the Mass.

It is customary on Saint Agnes’ feast day for two lambs to be brought from the Trappist abbey of Tre Fontane in Rome to be blessed by the Pope. On Holy Thursday they are shorn, and from the wool is woven the pallium which the pope gives to a newly consecrated metropolitan archbishop as a sign of his jurisdiction and his union with the pope.

St. Ambrose told St. Agnes’ story and others in “De virginitate” and had this to say about her: “Behold therefore in the same victim a double martyrdom, one of modesty, the other of religion. She remained a virgin, and obtained the crown of martyrdom.”

Hymns, poems, and plays have been written about St. Agnes. The Roman poet Prudentius composed a hymn in honor of St. Agnes in the 9th century, “Agnes Beatae Virginis.” Tenth-century nun and poetess, Hrotsvitha, wrote a play about St. Agnes and Grace Andreacchi wrote a play based on the legends surrounding Agnes’s martyrdom.

During medieval times, the memory of St. Agnes inspired rituals for unmarried chaste couples. A young woman would forgo supper on the eve of St. Agnes’ feast day in order to dream about her future husband. Other customs involved sewing one’s stockings together, or putting rosemary in one’s shoes, also to glean a vision of one’s future mate. In parts of Scotland grain was scattered in cornfields by unwed men and women who recited a poem as they did so asking for guidance to “let me see/The lad (or lass) who is to marry me.” Nineteenth-century Romantic poet John Keats wrote an epic poem, “The Eve of St. Agnes,” linked to these superstitions.

St Agnes is venerated as a saint in the Roman Catholic Church, Eastern Orthodox Church, the Anglican Communion, and Lutheranism.

O glorious St. Agnes,
You served God in humility and Confidence on earth
and
Are now in the enjoyment of
His beatific Vision in heaven because
You persevered till death and gained
The crown of eternal life.
Remember now the dangers that
Surround me in the vale of tears,
and
Intercede for me in my
Needs and troubles.

Prayer in Memory of Saint Agnes

All-powerful and
Ever-living God,
You choose the weak
of this world to
Confound the powerful.
When we celebrate
the memory of St. Agnes,
May we, like her,
Remain constant in our faith.