Last week we heard how St. John Paul II proclaimed the Mass as “Heaven on Earth,” and how Scott Hahn, Professor of Biblical Theology at Franciscan University, insisted that “We go to Heaven when we go to Mass.” Now, if the Mass is so wonderful, why does it receive so much criticism? 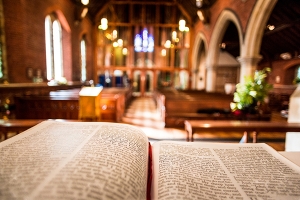 Many non-Catholics say that the Mass is not Biblical that it’s not based on the Bible, but we know that nothing could be further from the truth. At every Mass, there are at least three Bible readings, chosen from the Old and New Testaments plus a Psalm. These readings are based on a 3 year cycle, so that by the end of the third year, regular Mass attendees would have heard all of the Bible’s key passages proclaimed.

But that’s not all. . .almost every prayer we pray during Mass is rooted in Scripture, for the Mass is a dialogue between God and His people, with the priest as mediator. Our conversation with God is carried on almost entirely in the language of the Bible. Consider a few examples:

Every Mass begins with the Sign of the Cross. The words we say come straight from the lips of Jesus.

“Go therefore and make disciples of all nations, baptizing them in the name of the Father and of the Son and of the Holy Spirit.” (MT 28:19)

The priest then greets us in the words of St. Paul,

In the Gloria, we glorify God using the song the angels sang on that first Christmas night. “Glory to God in the highest.“ (Lk 2:14). Then as we prepare to kneel before the altar, we sing another Angelic song, “Holy, holy, holy Lord God of hosts.” (Rev 4:8). 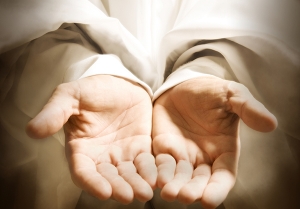 As the priest elevates the host and chalice before Holy Communion, he begins by praying the words of John the Baptist (Jn 1:29), “Behold, the Lamb of God who takes away the sin of the world.” And concludes with the words of the angel in the Book of Revelation, “Blessed are those who have been called to the wedding feast of the Lamb.” (Rev 19:9) We respond with the words of the centurion whose servant was healed by Jesus, “Lord, I am not worthy that you should enter under my roof,” (Mt 8:8)

“For I received from the Lord what I handed on to you, that the Lord Jesus on the night he was betrayed, took bread, and when He had given thanks, He broke it, and said, ‘This is my body which is for you. Do this in memory of me.’ In the same way also the cup, after supper saying, ‘this cup is the new covenant in my blood. Do this, as often as you drink it, in remembrance of me.’”

Jesus Himself taught us to unite the Bible and the Eucharist into one liturgy. St. Luke shows us how in the story of the Road to Emmaus (LK 24: 13-35). The Risen Jesus encountered two disciples on the road from Jerusalem to Emmaus. They had given up and were without hope. Jesus approached them, but they were prevented from recognizing Him. He asked them what they were discussing. They responded by asking Him if He was the only person who did not know about the events of the past three days. (The irony was that Jesus was the “only” one who truly did “know.”) Nonetheless, “Beginning with Moses and all the prophets, Jesus interpreted for them what referred to Him in all the scriptures.” As He spoke their hearts were burning within. When they arrived at their destination they pressed Him to join them for the night.

“So He went in to stay with them. And it happened that, while He was with them at table, He took bread, said the blessing, broke it, and gave it to them. With that their eyes were opened and they recognized Him, but He vanished from their sight. Then they said to each other, ‘Were not our hearts burning within us as He spoke to us and opened the scriptures to us?’“

They set out at once for Jerusalem and the Apostles, where they recounted to them what had taken place on the way and “how Jesus was made known to them in the breaking of the bread.”

Since that day, believers have gathered every Sunday, the day known as the Lord’s Day. In this gathering, we open the scriptures and break the bread, re-living at the Mass what the disciples experienced on the Road to Emmaus.

Next week:  The Introductory Rites