Last week, in the Gospel story of the Road to Emmaus, we saw how the opening of the Scriptures and the breaking of the Bread is re-lived in every Mass. That’s why every Mass is structured the same way. Some people criticize the structure and ritual, but we are all creatures of habit whose lives are ordered around the same routines each day. (If you don’t believe me, try brushing your teeth with your other hand.) Order and routine in our daily lives is welcome and necessary. The Church, in her wisdom, has recognized this and that’s why we see order and structure in our Catholic worship and prayer. In the Mass, what we use, how we use it, and what we pray and say is important and intentional.

The Mass has two main parts: The Liturgy of the Word and The Liturgy of the Eucharist, with an Introduction and a Closing. The “Introductory Rites” make up everything from the beginning of Mass to the First Reading. They can be described in one word: “Gather.” 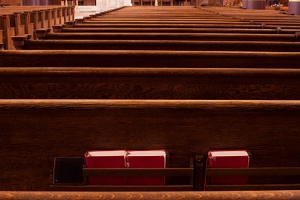 The gathering process actually begins before you ever arrive at the church, as we prepare ourselves to participate in the Sacred Mysteries of the Mass. One way we prepare ourselves is by abstaining from food and drink at least one hour before receiving Communion. Another way is to think about our own private Mass intention. In addition to the formal, public intention for each Mass, we should also bring our own private intentions. We bring our worries and concerns and place them before God. St. Paul said,

“Have no anxiety at all, but in everything, by prayer and petition, and with thanksgiving, make your requests known to God.” (Phil 4:6)

Prior to Mass and before I ever arrive at the Church I have thought about my own personal intentions. Is someone in need of prayers? What worries, concerns and problems am I facing? I arrive at least 15 minutes before the start of Mass in order to ask the Lord, in prayer, to receive my personal intentions for the Mass.

The actual celebration of the Mass begins with the Gathering song and the procession of the priest and ministers to the altar. During the procession, the deacon or lector carries The Book of the Gospels, but it’s not placed on the ambo, where the Word is proclaimed. Instead, it’s placed on the altar, signifying the Unity of Christ in Word and Eucharist.

The priest and ministers process to the sanctuary, where the priest (and deacon) with a deep bow and kiss, reverence the altar where God’s people are fed with the Body and Blood of Christ.

Later after proclaiming the Gospel, the priest (or deacon) will kiss the Book of the Gospels. He kisses the book and he kisses the altar to signify Christ’s presence in both Word and Eucharist.

The Mass begins with the Sign of the Cross reminding us that this holy liturgy is done in the name of the Father and of the Son and of the Holy Spirit; and that it is done through the power of the Cross. The priest then greets the people saying, “The Lord be with you.” We respond, “And with your spirit.” This response is a little awkward sounding. What does it mean? . . . . When we respond, “And with your spirit,” our response is not to the person of the priest, but to the Spirit of God who ordained him to serve the Church. It’s an acknowledgment of the spirit and grace which is in him. 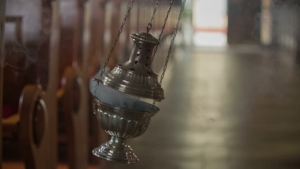 After the Penitential Rite the Gloria is prayed. The Gloria is an ancient hymn, an act of joyful praise to God the Father, Jesus the Son, and the Holy Spirit. Because it’s a hymn, whenever possible the Gloria should be sung rather than recited. It begins with a scene from the Christmas story – the Angels announcing the birth of Jesus in Luke’s Gospel (2:14): “Glory to God in the highest.” It finishes with the affirmation of the Blessed trinity: “You alone are the Holy One, You alone are the most high, Jesus Christ, with the Holy Spirit, in the glory of God the Father.” 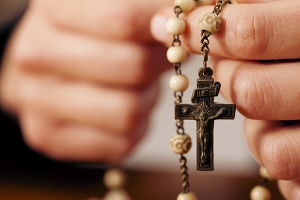 The Introductory Rites end with the Opening Prayer also known as the Collect. The term Collect is used to describe this prayer form because as the prayer begins the priest says, “Let us pray.” He then pauses for a brief period of silence, then prays the prayer, gathering or collecting the intentions of the people and offering them to God. (This is where you can offer your personal intentions for the Mass.) This style of prayer is known as an “oration,” a term which means “prayer” and is entrusted to the priest alone. There are three principal orations in the Mass: the Opening Prayer which concludes the Introductory Rites; the Prayer over the Offerings which concludes the Rite of Preparation of the Gifts; and the Prayer after Communion, which concludes the Communion Rite.

The Introductory Rites conclude with the Collect and the Liturgy of the Word begins.

Next week: The Liturgy of the Word