The Liturgy of the Word has four main parts. Scripture Readings, Homily, Profession of Faith and Prayer of the Faithful. 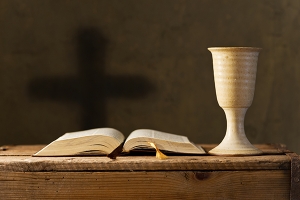 It begins with the Scripture Readings: a dialogue between God and his people. God reveals himself to us through the proclaiming of the Holy Scriptures and when God speaks, His Word requires a response. How do we respond? We listen with reverence and reflect on God’s Word in the intentional periods of silence between the readings and the Responsorial Psalm. Listening and reflecting allows the Holy Spirit to speak to each and every one of us.

The Scriptures were written under the inspiration of the Holy Spirit, and are unlike any other texts we will ever read or hear. They are truly the Word of God. We should be listening as if Christ, himself were standing there speaking to us, because, in fact, it is God who is speaking when the scriptures are proclaimed.

We should prepare for the Liturgy of the Word by reading and reflecting on the Scripture readings before the start of Mass. The United States Conference of Catholic Bishops has a website – USCCB.org – which contains the readings for each day along with a short video reflection. Reading and reflecting on the readings prior to Mass, allows us to hear them during Mass in a more profound way. It’s like listening to a story a second time. We always hear new details and gain new insights.

The proclamation of the Gospel is the climax (or high point) of the Liturgy of the Word. The Gospel receives special signs of honor and reverence because it tells us about the life, ministry and preaching of Christ:

Standing and singing the Alleluia, while looking lovingly at the Book of the Gospels, reminds me of Jesus’ words, “If anyone wishes to come after me, they must deny themselves, and take up their cross daily and follow me.” (Lk 9:23) In the history of Christianity countless Christians have given up their lives for the Gospel. Even more make daily sacrifices proclaiming and living out the Gospel message. As the priest raises the Book of the Gospels, we should ask ourselves, “Can we follow their holy example?”

The Scriptures are not always easy to understand and apply to our daily lives, so we have the Homily to “break open” the Word for us, helping us to make God’s Word our own. There is a powerful symbolism in the fact that the priest who breaks open the Word of God in the Homily, later breaks the Bread of Life that we share in Communion. 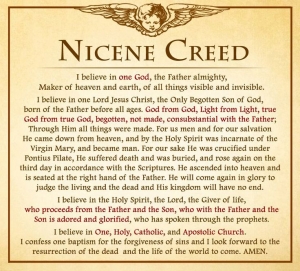 After the Homily we recite together the Profession of Faith or Creed. The Creed used at Mass was formed at the Councils of Nicaea and Constantinople in the 4th century. It is a statement of Christian belief and comes from the Latin “Credo,” “I believe.” When we recite the Creed, we join ourselves with other Catholic Christians all over the world who recite the same creed. We make a promise to them, to ourselves, and to God that we will hold ourselves to the teaching of the Church. As we speak this prayer in the singular, all of our individual “I believes” become one collective “We believe.”

It is so easy to recite the words of the Creed without really thinking about what we are saying. The Creed is the faith of the Church. It’s what we believe. Many Christians in other parts of the world are made to suffer because of their belief in this Creed. The Carmelite Saint Therese, the Little Flower, during a crisis in faith, wrote out the Creed in her own blood.

PRAYER OF THE FAITHFUL

Next week:  The Liturgy of the Eucharist