Challenged and formed by God’s Word, we now move to celebrate and participate in the sacrifice of Christ, which brought about our salvation. As Catholics we know and believe as a certain and unshakable truth that the Mass is a sacrifice. Nevertheless, many deny this truth. They ask, “Why do Catholics want to crucify Christ again and again?” While it is true that the Sacrifice of the Mass is the same sacrifice as the Cross and that Christ is the same victim, the manner in which the sacrifice is offered is different. On the Cross, Christ was offered in a bloody manner; at the Mass He is offered sacramentally, in an unbloody manner. On the Cross, Christ gained merit and satisfaction for us, while in the Mass He applies to us the merits and satisfaction of His death on the Cross. St. Thomas Aquinas said, “If you close your eyes at the Cross you are at the Mass, and if you close your eyes at the Mass you are at the Cross.”

Our attention is shifted to the altar as it is prepared for the Liturgy of the Eucharist. The offerings of bread and wine, along with the monetary gifts of the faithful, are brought forward and received by the priest. The priest places the gifts of bread and wine on the altar, elevating first the bread and then the wine with prayers that acknowledge them as gifts of God in which the work of human labor has played a part. This is the 1st of 3 times that the gifts are elevated.

The priest then invites the faithful to pray that the sacrifice to be offered, a sacrifice which he designates as “my sacrifice and yours,” will be acceptable to the Father. Our spiritual sacrifice is offered with the sacramental sacrifice of the priest. The Rite of Preparation of the Gifts concludes with an oration prayer similar to the Collect.

The Eucharistic Prayer begins with a dialogue between the priest and the people. The priest begins: “The Lord be with you.” We respond, “And with your spirit.” This response acknowledges the Spirit of God given to the priest at his ordination. Here it has profound meaning because the Priest is about to consecrate the bread and wine into the Holy Eucharist.

Priest: “Lift up your hearts.”
People: “We lift them up to the Lord.”
Priest: “Let us give thanks to the Lord our God.”
People: “It is right and just.”

The Preface immediately follows. It reminds us of all the reasons we should give praise and thanks to God. The Preface concludes with the singing of the Sanctus – The Holy, Holy. The Sanctus reminds us that all creatures in Heaven and on earth owe thanksgiving to God.

Immediately after praying the Sanctus we kneel. Kneeling is a sign of humility and respect that is distinctly human. It is something that even the angels who are pure spirit cannot do. 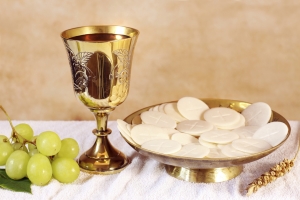 The Eucharistic Prayer continues with the Epiclesis, an invocation calling upon the Holy Spirit to bless the offerings of bread and wine. The priest prays:

“Make holy, therefore, these gifts, we pray by sending down your Spirit upon them like the dewfall, so that they may become for us the Body and Blood of our Lord Jesus Christ.”

The Consecration, follows. During the Consecration if you listen closely, you will notice that the priest starts out in the third person: “At the time he was betrayed and entered willingly into his passion, he took bread, and giving thanks, broke it, and gave it to his disciples, saying:” Here the priest begins speaking in the first person – speaking the words of Jesus himself: “Take this all of you and eat of it, for this is my Body, which will be given up for you.” When I first realized this shift in speaking from third to first person, I was utterly amazed to realize that Jesus is speaking to us through the priest, just as he spoke to the Apostles at the Last Supper over 2000 years ago! 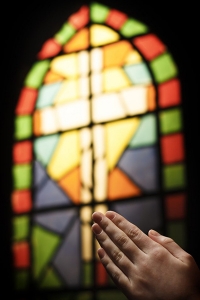 During the consecration, the host and the chalice are each elevated for a 2nd time. This is called the Major Elevation and the bells are rung with each elevation. As my eyes are fixed on the Living God elevated in the hands of the priest, I say a simple prayer that the nuns taught us: “God the Father, God the Son, God the Holy Spirit, I love you.” Another appropriate prayer is the words of St. Thomas: “My Lord and My God.”

After the Consecration, we sing the Memorial Acclamation, reminding us that what we truly believe is a mystery. God sent His only Son to earth to become a man like us; He died to redeem us from our sins; rose from the dead; and will return again. A mystery indeed! And yet we believe. In the Mass we do not just observe this great mystery, we actually participate in it!

After the Memorial Acclamation, the priest prays the Anamnesis, or prayer of remembrance. Anamnesis is Greek for, “calling to mind.” The priest keeps the memorial of Christ’s visible stay on earth, as a pledge, of what Christ continues to do through the Eucharist.

The Eucharistic Prayer includes a number of Intercessions, which, in communion with Mary and all the saints our petitions are offered for the Pope, our bishop, all the clergy and all the people living and dead.

After the intercessions, the priest elevates the host and the chalice for the 3rd time and prays the final doxology: “Through him, and with him, and in him, O God, almighty Father, in the unity of the Holy Spirit, all glory and honor is yours, forever and ever.” To which we respond, “Amen.” At the conclusion of the Doxology, the Communion Rite begins.

Previous week:  Liturgy of the Word

Next week:  Communion Rite and Closing